The snowstorm raged outside as I sat by the wood stove, sipping my second mug of coffee. The wind slammed and rocked against the tin roof and gutters. The dogs lay on their beds, not keen for a walk. The cat however ran outside, did his business, and flew back through the doggy door. A freezing January morning in New Mexico, nothing surprising really, and instead of it putting me off driving to Santa Fe for the Women’s March on Washington, I was more determined than ever. Grinning, I prepped myself for a cold hour’s drive.

With a shovel, extra clothes, another mug of coffee, I headed out down the dirt road in four wheel drive, taking it slowly, and wondering just how bad it would be on the highway. I couldn’t stop grinning though. Today. This was the day we’d show up, stand up, and be counted. Trump was the new president. We were the force of opposition. We had to show up. We had to show up at the marches all over the world. And we did. Oh, we did. 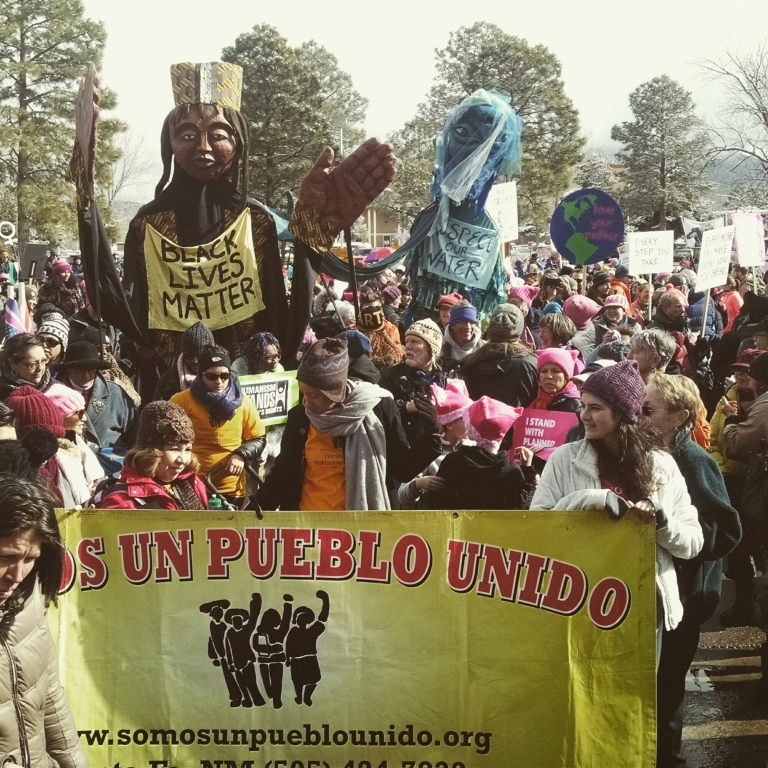 Santa Fe has never seen such a crowd, such numbers at any protest or parade. And not one person disturbed the peace according to the police. Even more amazing is that with over 2.4 million at world-wide marches there were no riots, no fights, nothing to turn this peaceful  movement into a negative news story. I’m proud of us. I’m proud of our town, Santa Fe, and all those who drove down from Taos, Questa, Las Vegas, and all the other small rural communities. Incredible it was to walk around the plaza with thousands of women, men, kids, all walking and talking in this magical march. So heart-warming for me. I met so many friends there. 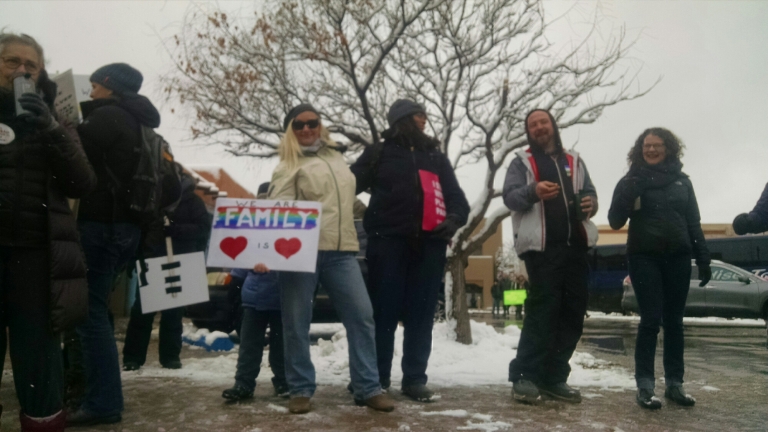 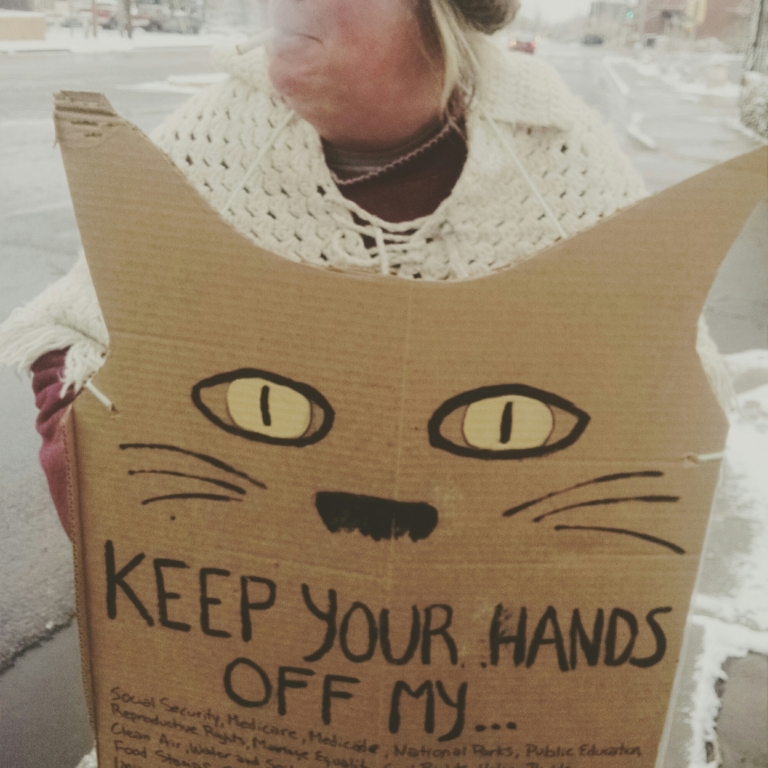 Where were the media though? I saw no cameras, no film crews, and didn’t hear of a single interview. With some thirteen thousand marchers in Santa Fe, this was news. Huge news. Silence though from the media at the time although I did see some coverage in the newspaper the next day. Instagram was filled though, another place for us all to come together and share the experience. Who needs mainstream media, right? We got our photographs, stories and experiences out to those who couldn’t be there with us. I had friends from the UK sending me photos of the marches in London and Manchester, sending me their support for the years ahead. Stay Strong. We’re with you. 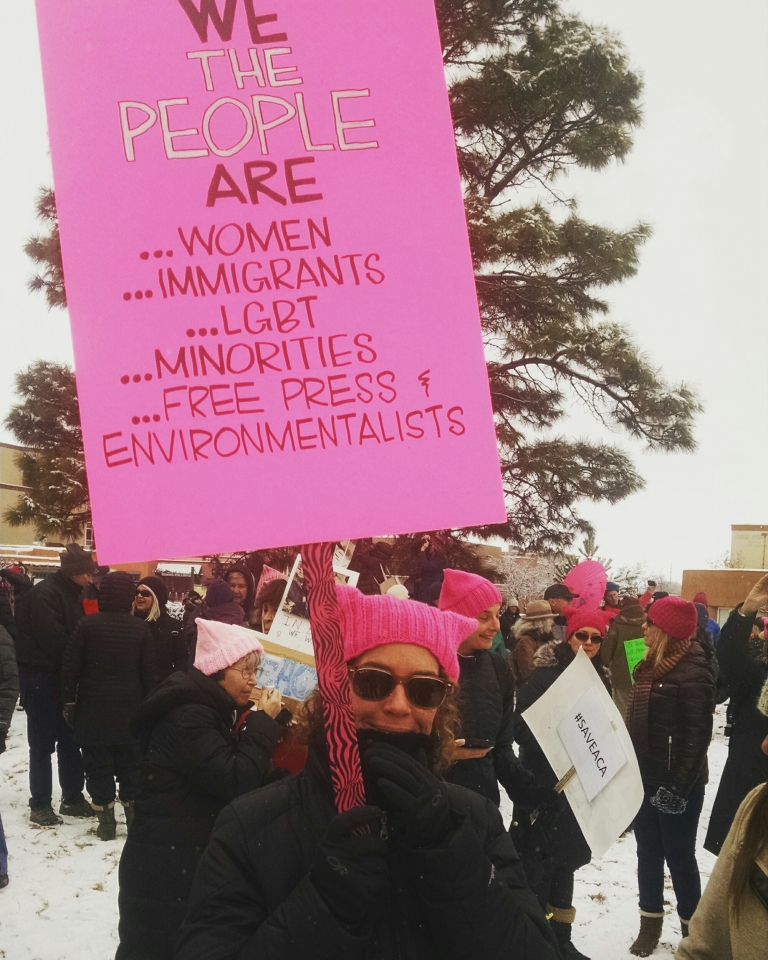 Trump has unified people more than you’d think considering his divisive language, despite his “alternative facts” about the showing for his inauguration as compared to the Women’s March the day after. Poor boy, we didn’t go to his party, we threw our own. 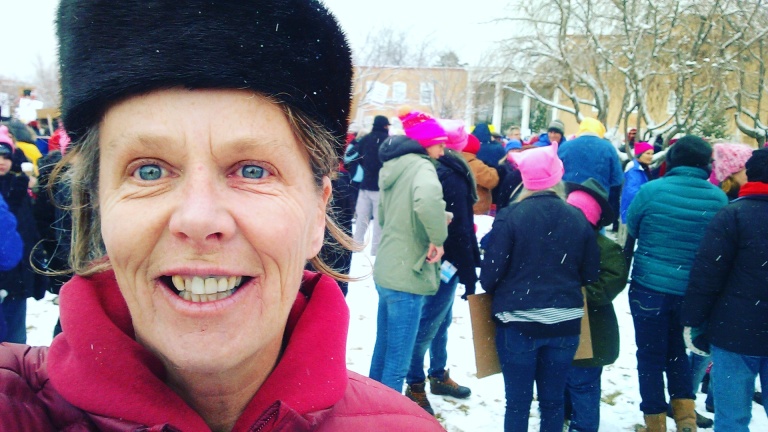 But why? How will this help? We all have different answers to this. For me, voting, being part of this community, a resident in this country, it’s so much more than how the next president can help me and mine. The bigger picture is much more important than what effect or threat Trump’s policies have on me personally. How can it not be? How can you think of yourself at times like this? I had to stand up, and show up. My friends are affected, the Muslims community, the comments Trump makes about Mexicans, Syrians, and immigrants in general. The number of legal cases against him for his attitude and actions towards women, recorded, videoed, quoted, this appalls me. Character counts. This election was for me about values not just political policies. 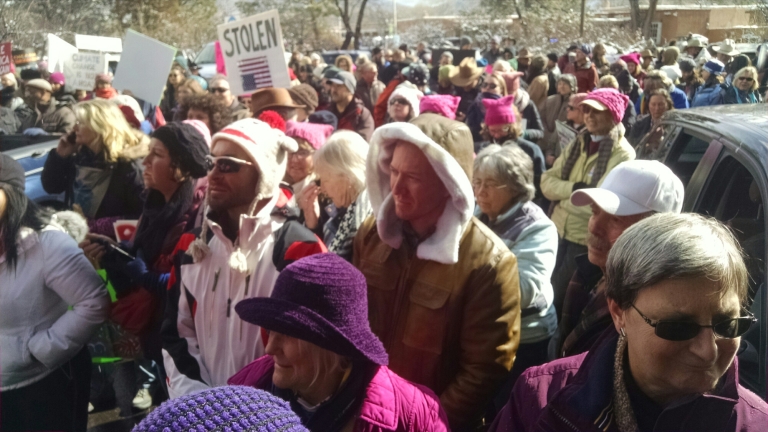 It’s hard to define how this march makes a difference in my life but it does. I was there. I drove through a snow storm to get there. I had to be there. I really did. My silence, any kind of sitting back with the “get over it” attitude I hear expressed, that’s not an option. I am part of this. We all are. I’m provoked, disturbed, and inspired. 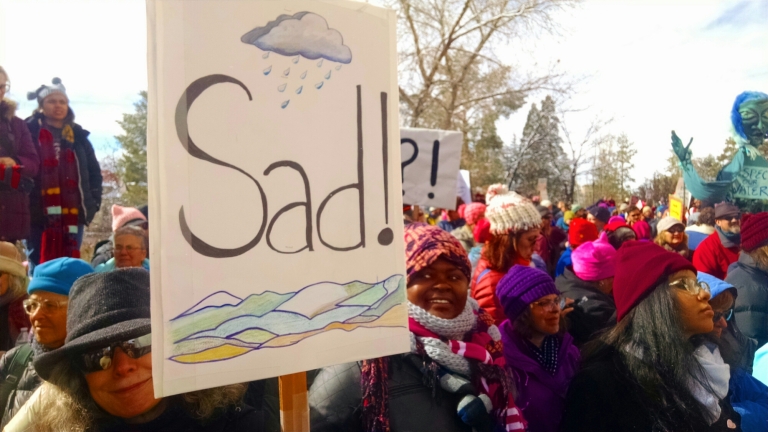 Yes, I’m disturbed. The signs and photographs at the marches all over the world affected me, some were hilarious, others so true as not to be not funny, and others simply provocative. One that stopped me stated that 53% of white women voted for Trump. Really? Really? My stomach turned and I couldn’t get that number out of my head, bugging me as I took in the whole experience, as a white woman, queer, and an immigrant, I was truly upset that this could be true. 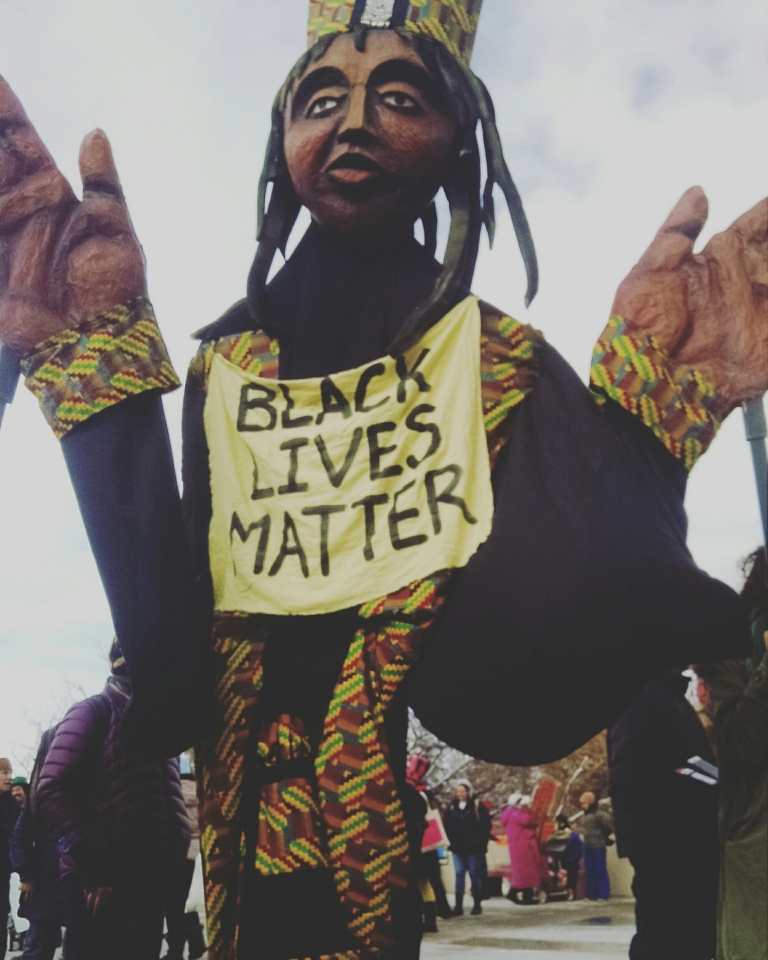 The day after the march, I took to the computer, partly to research the numbers on the marches all over the world, as well as the voter exit polls to see what had happened. A few sources repeated the fact that 53% white women voted for Trump. It’s true in a sense but that’s a misleading use of percentages, of facts and data. I’m not great at maths for sure, I’m a story-teller, a photographer and illustrator, not scientist or statistician. Here though is a summary of what I found and yes it’s still disturbing.

So 53% of the women who voted for Trump are white, which is quite different from 53% white women voted for him. Am I missing something here? Is my logic faulty? I honestly don’t know, but this is how I was able to break it down and seriously if you see where I messed up, let me know. 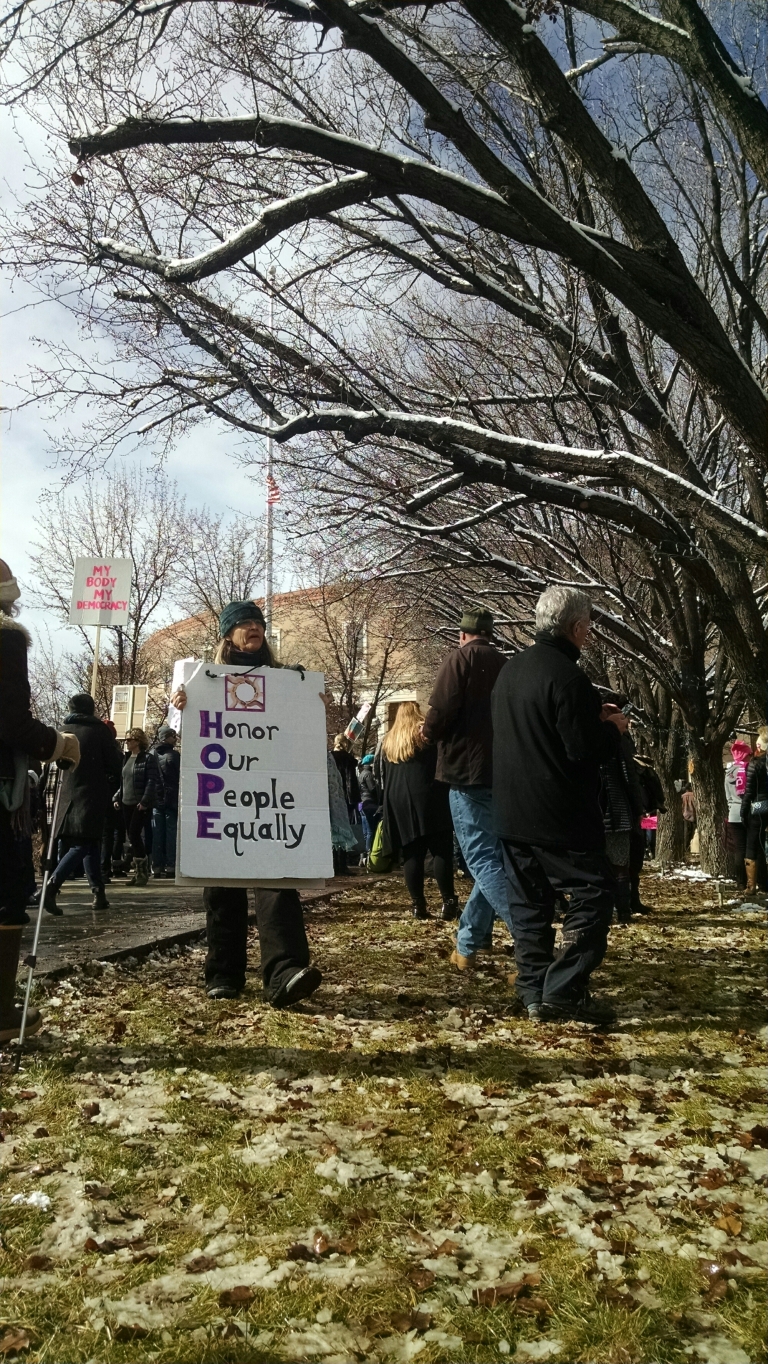 These numbers disturb me, they still do. But what is more uncomfortable for me is that of the women who voted for Trump, if 53% were white, then the other 47% were non-white, and from what I can tell is that a surprising number were Asian and Hispanic women voters. That upsets me even more than the white women to be honest. I can kind of see that the mostly uneducated white women who voted for Trump saw a rich white man who offered to help them. It’s part of the culture, isn’t it? Rich White Man is in charge. Those who haven’t been taught to think for themselves, critical thinking as being the core of a decent education, they’d follow what their local media tells them, right? I didn’t realize that so many non-white voters would still chose Trump. That’s the most provocative statistic for me.

Where do we go from here? There is so much under threat immediately. It’s hard to know. I have to pick my battles, one day at a time. Take care of my close community. Look beyond my own comfort levels and see who else is affected. Women’s Health? Queer rights? The environment? What? Looking at the numbers above, it’s given me a focus. On education specifically. I don’t have kids. My friends do. My neighbors do. My brother does. 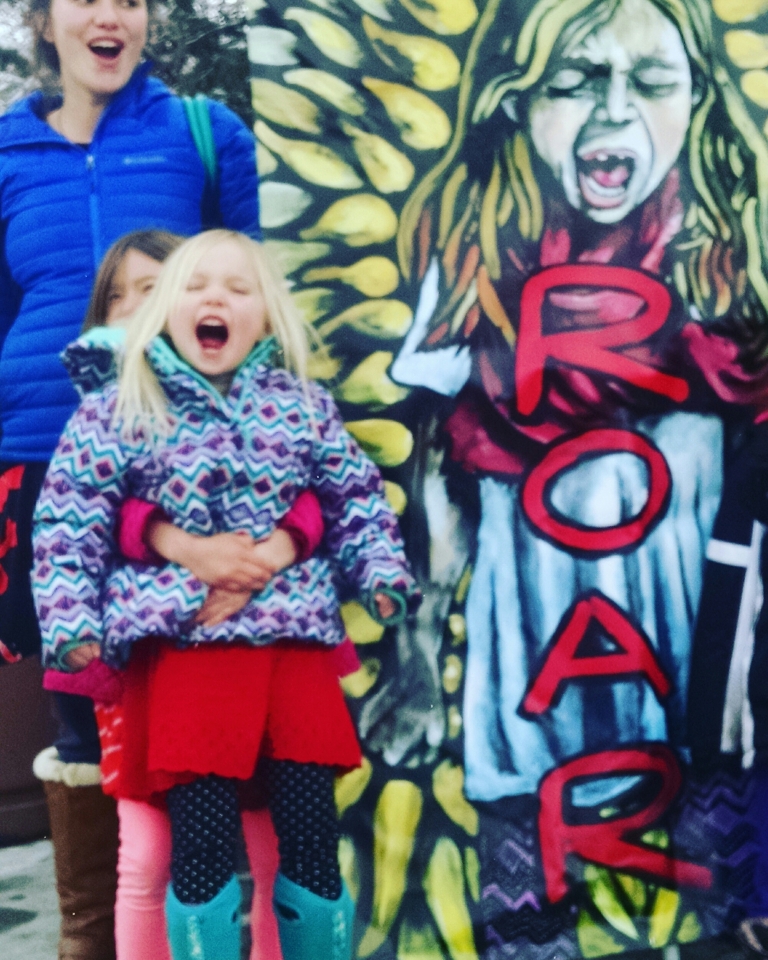 Education matters but it’s not a case of standardized tests. It’s teaching kids about other cultures and races, religions, and lifestyles. It’s about critical thinking, considering the facts and deciding for yourself. It’s learning to think beyond your own experiences and to develop an open mind and heart. Education needs well-paid teachers, resources, and encouragement. The anti-intellectual culture in much of America needs to be challenged. Educated. How I’ll be a part of this, I don’t know for sure but the focus is clear for me: Addressing the poor voter turn out and the lack of education plaguing this country.

In the meantime, I drove home after the March so inspired by this small town of mine in New Mexico. I was part of something bigger and that matters. Silence is not an option. 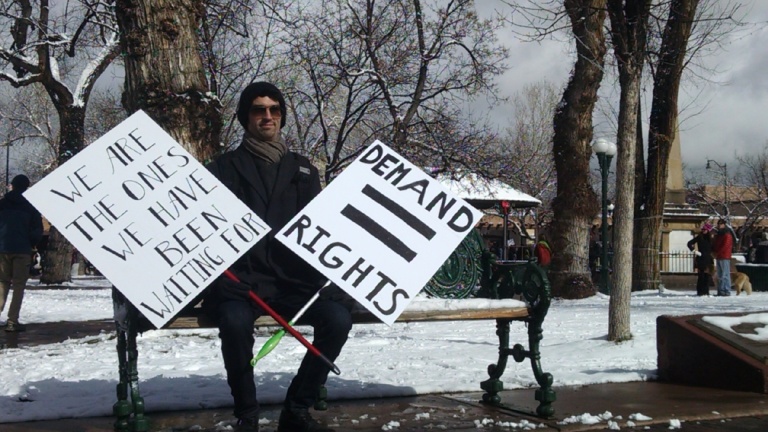