Sarah Leamy is the author of the award winning books, When No One’s Looking, Lucky Shot, and Lucky Find, as well as Van Life, a travelogue from exploring the Northwest with two dogs and a cat called Stephen. Lucky Shot (2012) and When No One’s Looking (2016) won Best Gay Fiction in the New Mexico-Arizona Book Awards. Lucky Find was a finalist for the same award in 2014. Van Life won Best Non-fiction/ Grand Winner Award in the Great Northwest Book Contest of 2017 and was a finalist in the NM/AZ Book Awards 2018.

Sarah is the Founder and Managing Editor of the successful travel story website www.wanderlust-journal.com with over 40,000 visitors in the first year and 58,000 by 16 months.

Sarah is working on Passing Through,a collection of short stories set along the Continental Divide, currently being looked at by a couple of publishers. See a clip of her reading a few of the pieces while in Vermont 2019. https://youtu.be/5J9VTAOdODk

She is also a freelance writer for Rovers North and Classic Land Rover magazines with a specialty focus on profiling Series Land Rover owners. Sarah is on the editorial team for upstreet journal.

She published a chapbook of prose poems, Speak Up, as a DIY travel, teach, and here-you-go-read-this-as-it’s-not-for-sale-in-bookstores.

She is revising a novel set in East London in 1993 while working on another novel, Signs, a quirky lighthearted story of a dyslexic librarian in Montpelier, Vermont.

In other words, she’s busy. 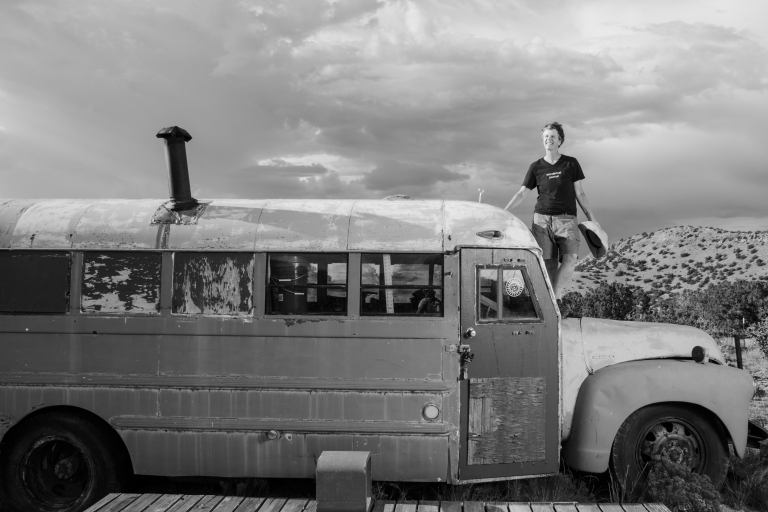 AWP Writer to Writer Program as a Mentor, 2018

Van Life, a travel memoir, is finalist in the 2018 NM/AZ Book Awards

Many more over the years, listed in the resume somewhere…

As MC for a variety show in Madrid, NM. https://youtu.be/Yd5dgNM8PIU

How long have you been writing?

I’ve been writing since I was a kid at middle school, winning a book for my journal on a mountaineering trip we’d taken in Wales. I make sense of my world and experiences through words on paper. I create new lives, and explore darker emotions than possible in my daily life. As a queer immigrant writer, I come with many stories and a variety of characters, all wanting to be heard. I’ve lived in Europe, the Southwest, and Guatemala. I currently live in Vermont.

What are your future plans?

To finish my MFA in Writing and Publishing with a collection of short stories to tour, as well as finish the next novel. I’d like to take my work across the States, talking about the craft of writing, finding inspiration, and how to live a writer’s life.

Where did you grow up?

I grew up in Worcestershire, England, spending much of my time on my Gran’s farm nearby, where generations of my family have lived and worked. Then to the States in my twenties.

Why do you write?

I write because I have to. If I spend too many days without putting words on paper, I lose my enthusiasm for life, I withdraw. I need to create. Writing is one facet of all that I do.

When did you realize that you wanted to be a writer?

As a kid, I wanted to write and be read. Writing is a need. Being read was the hope.

Do you ever have problems with writer’s block? How do you deal with it?

I have phases when I write, others when I am creating a new show for myself, or am focused on producing variety fundraisers for people in my village. I don’t worry if the words don’t come. There is always a creative outpouring.

What research did you do for the book, if any?

Falling in love with someone I knew would betray me.

WITH TWO DOGS AND A CAT IN A CAMPER VAN.

The housesitter backed out only days before the planned departure so Little Stevie, the cat, would be coming with them after all. Three months, two dogs and one cat: What could go wrong?

With her two friendly pups, Harold and Rosie, and a somewhat feral cat, Sarah explored the Northwest in the summer of 2016. Passing through Colorado, Wyoming, Montana, Idaho, Washington. and Oregon, this odd family meandered down little used back roads, camping by rivers, lakes and on the Pacific ocean beaches. They stumbled across many a rural village, cafes, and microbreweries, chatting to the locals along the way.

Sarah’s writing reminds us of Blue Highways, Bill Bryson and with a touch of The Tao Of Pooh.

The Right to Die: who decides? Could you make that choice for another? Would you? Or is it up to the politicians? The doctors? The religious right(eous)? Or can we make these hard decisions for ourselves? When your loved one is critically damaged, do you have it in you to end a life?

Eye-Opening Novel Asks: Can Life (and Death) Be Captured in a Photo?

A photographer’s lens can capture many things. In the novel Lucky Shot: a Novel of Sex, Death, and Photography, the photographer in question is Lucky, whose life becomes a snapshot on an extended journey of self-discovery, from the time when Lucky runs away from the pain of those hospital visits and towards something else. But it’s not easy, none of it, the traveling, the new relationships, nor the memories haunting both days and nights.

KIRKUS: Readers who enjoy vulnerable, flawed characters will find themselves engaged by Lucky’s courageous attempts to leave the past behind. [… R]eaders will ultimately be inspired.

LUCKY FIND is set in New Mexico and Arizona. Leamy evokes the atmosphere, landscape, and life in the Southwest in her novel about family and friendships within a road trip through southern New Mexico and into Bisbee, Arizona, up to Flagstaff and back home to Santa Fe. The novel opens, as any good novel does, with a cliffhanger that leaves the reader wanting to know more about Lucky’s circumstances:

“This is going to hurt.”

Dr. Fletcher almost drops the needle in his hand and stares at me. I smile.

“Joking. Well, not really. But what were you saying?” I smile again, trying to reassure him. I’m not sure of what.

Lucky takes a journey of self-discovery with Mike, a friend from childhood, and a collie named Blue. They end up in Arizona chasing down clues to find Lucky’s recently discovered half-sister and the two find so much more than they’d expected in some of the most beautiful places in the Southwest.

WHEN NO ONE’S LOOKING

“When No One’s Looking makes me homesick for the simple, hardscrabble, poetic life that unfolds daily in the Ortiz Mountains of New Mexico — and for the raw, fearless emotions and journeys of its people, as brought to life in Sarah Leamy’s protagonist Joey. It’s a story about the outer and inner landscapes that lead to love, to hate, and ultimately to wisdom.”

An engagingly written novel that spans six countries and over 40 years, the story centers on an obsessive pair of lovers who cannot stay away from each other. Joey and Kat have had a messy relationship dating back to 1967. We follow their mis-adventures from a small town in New Mexico, to Central America, Spain, Russia, the United Kingdom, and back to New Mexico. Looking back over the years, Joey reminisces with best friend, Paula on what could have been, while planning a final gathering of friends and family.

THANK YOU FOR YOUR TIME.