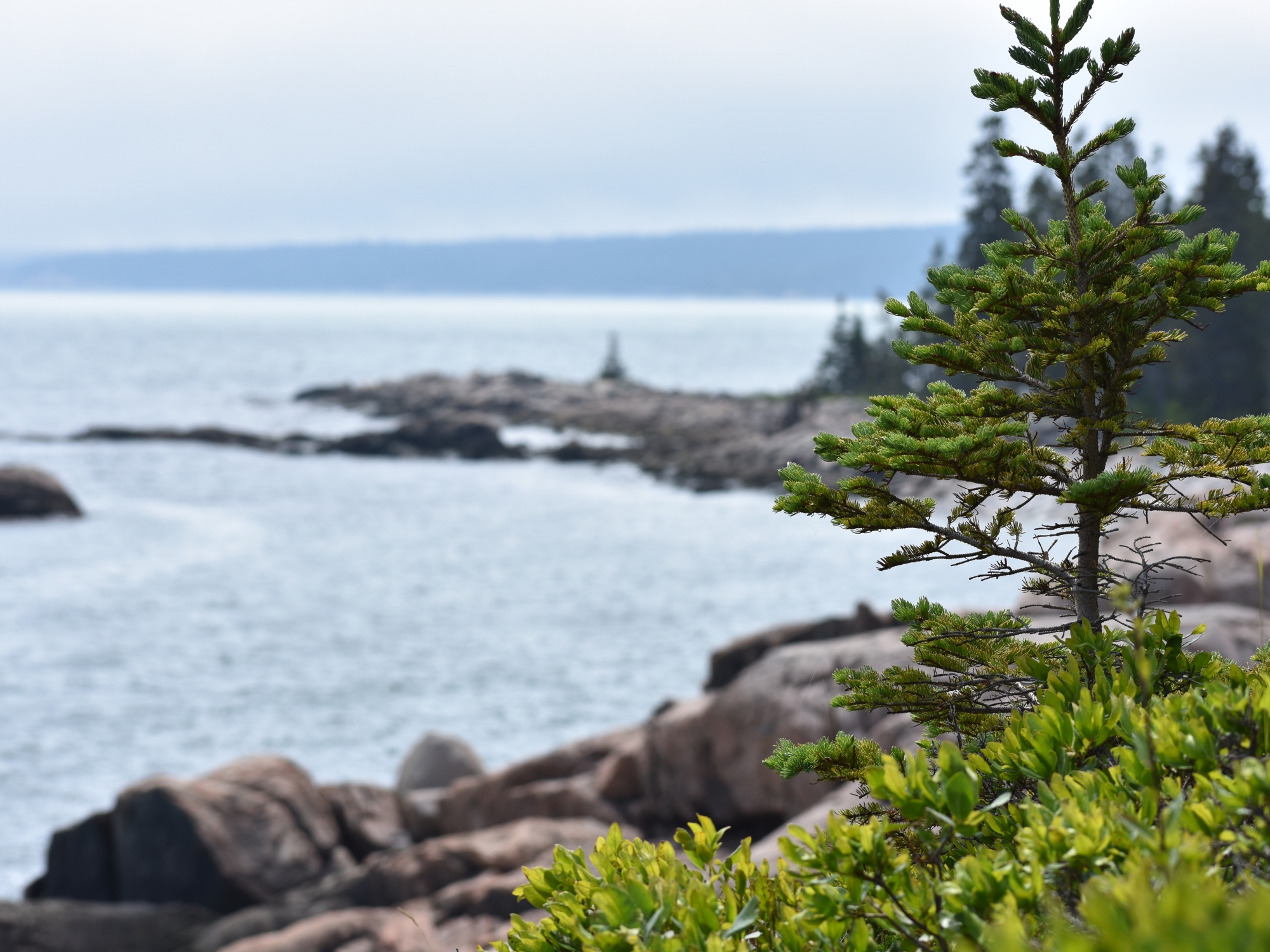 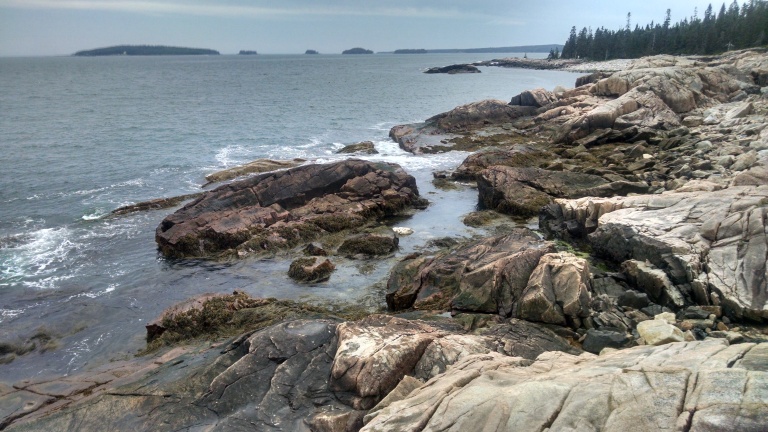 Mid-summer in Maine and the campground is empty but for three other sites, although the tall fat fella in the white van with a hound dog drove out this morning. Perhaps he’s moving on? Another couple in the big sand colored tent drove by shortly after and it’s not even 8.30. Maybe I’m alone then? Is anyone else around? Time to explore, well, after the morning coffee on the rocks. Rocks on the coast, solid sit-upon boulders, smooth under bum, and slippery under paws (Harold’s).

I’ve been up for hours, the light wakes us around 5am, the lobster trawlers thunder by, deep and low in the water as I sit on those rocks with a plain coffee. The fog is so thick this morning that the boats are invisible even though voices talk back and forth over the rumble of engine and waves, tides and eddies. 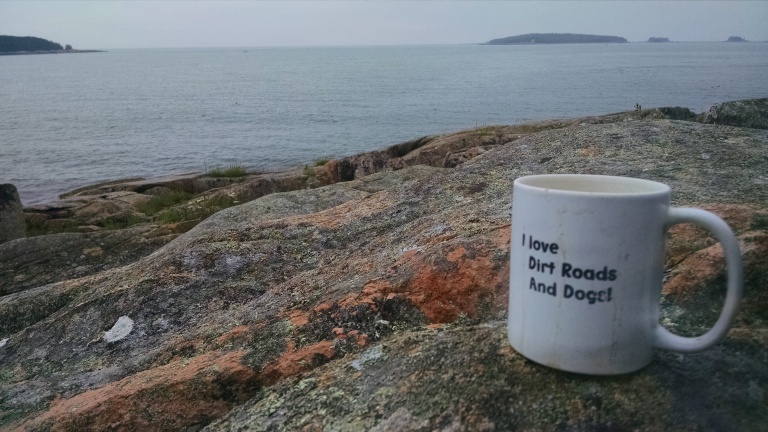 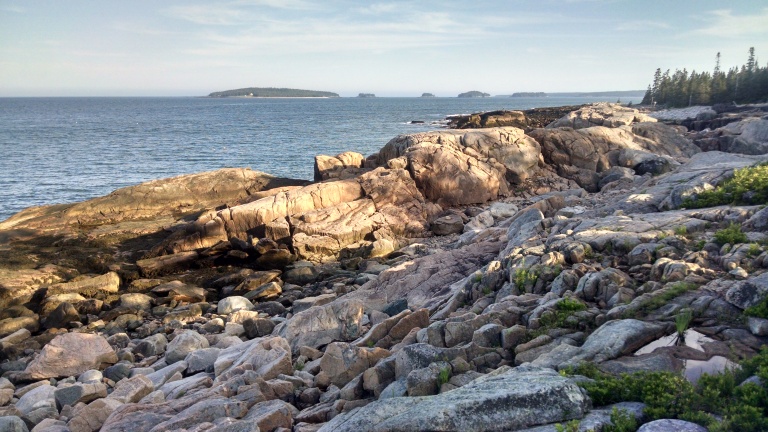 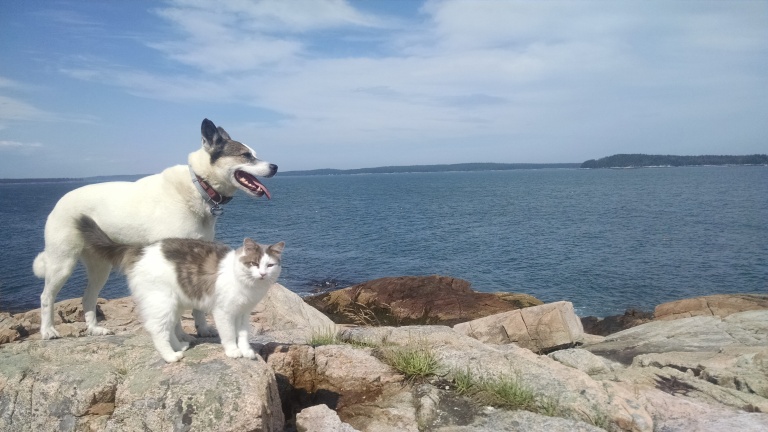 McClellan Park campground is a little known hideaway right on the ocean with ten sites for campers and tents. The road down is winding and narrow through dense woodland but easy on the vehicle, just tight, there’d be no room for anything bigger than a Sprinter. We pull off to let a sedan pass on the way up, and the couple tells me to claim number twelve.

“It’s open, a nice little bit of meadow, and just the other side of the trees is the shore.” She’s missing a tooth up front in that cheery smile of hers, and her husband says something unintelligable. They wave me off. My new neighbors.

We camped in number twelve as directed with a hundred feet of mown grass, a ring of birch trees and the sound of the incoming tides on the rocks. The fire kept us warm although the wood Dennis, the caretaker, sold ended up being damp and green. That couple I’d mentioned though, they brought me some dry wood one morning.

“I was worried you’d be cold, that other stuff doesn’t put out much heat, does it? Here you go, your cat came by this morning. I saw him in the trees, shy isn’t he? Yes, I told Jerry we needed to bring you some wood, get you warm. It’s chilly today. They say it’ll rain tonight so cover up your stuff, won’t you?”

She’s in striped loose pajama pants, a pink checkered long sleeved shirt, and another purple layer over her shoulders, quite a colorful thick-set woman in her sixites. Her frizzled hair is held back by bright red plastic clips. Jerry wears work boots, pressed blue jeans, and a sweatshirt with Vietnam Veteran in bold white letters. His front teeth are missing, his tongue swallows his words, and his grin is like a ten-yer-old boys, all mischief and innocence. He’s about the same size too, wiry, compact, small as a pre-teen.

“You have to visit Jonesport, it’s pretty. My sister lives in Millbridge, that’s why we come here. We only live an hour away but love camping here each summer. Columbia Falls too, that’s a stop if you’re heading to Eastport. South of here, go see the ferris wheels on the beach. Jerry here was on stage for July 4th. He’s an Elvis impersonator.” 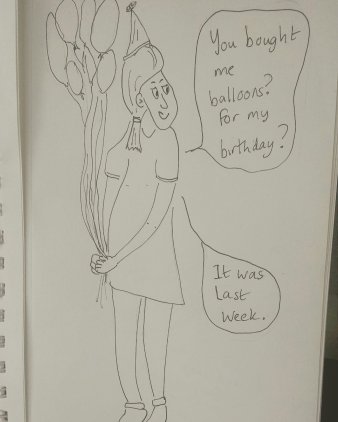 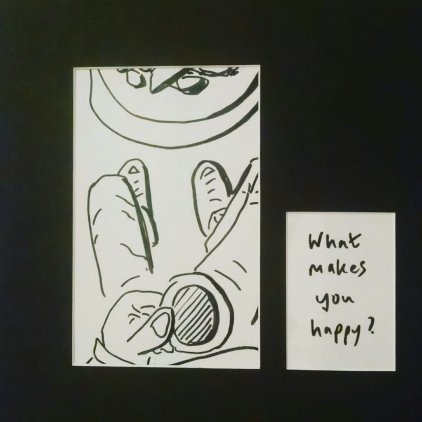 Millbridge is an odd little town in US 1, with very little by way of tourism, just a couple of stores, a diner and a mexican take-out, just what we want on the ocean, mexican food, right? I don’t find anywhere to get clam chowder, a sudden craving on these grey days. There’s a laundromat, library, bank, and a couple of churches, but no cafes or brew pubs that I can see. Bummer. I’ll not be staying here too long then. The supermarket undercharges me for the beer and I say nothing but feel guilty for a moment, and again as I write this. Oh well. I have worse regrets.

The shore is rough with a deep sudden drop from brown-stained rocks into swilling waves below. My brain imagines Harold slipping in and that fear that comes, knowing I’d jump in to save him. Probably kill us both. But I’d have to. It’s Harold. Fuck. “Get away from there!” I startle us both, he slips but not into the Atlantic.

We walk in the mornings, early, mid, late. We walk in the afternoons, every hour or so I jump up from book or laptop, “let’s go, guys.” All three pets bounce up, two dogs and a cat, and off through the trees we go, over the rocks, I sit on the grass to the east of this path and lean back. I can spend hours staring out over the ocean. This calm rejuvinates me, brings me back to myself, and reminds me of the Gower Coast in Wales. The grey skies with occassional bursts of sunshine. The salt on my skin. The damp air curling my hair. I wish there was a way to live on the coast like this, wake up each morning to stare out over the horizon and daydream in the cool breeze off the ocean. Can I? Make this a goal of mine? Why not? Or perhaps just drive along coastlines for the rest of my life? I could do that. 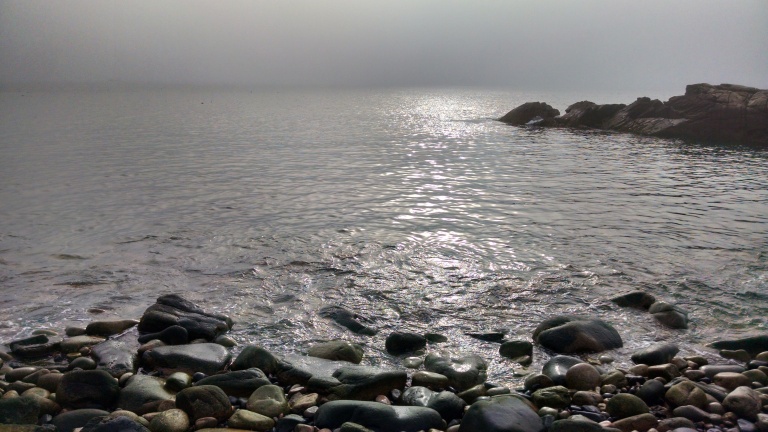 My brain ticks over, the lists, the stressors, all that needs to be taken care of in the next few weeks. Instead of tackling any of this increasing number of projects and the relevant details, I make another cuppa. This is the week before I move in finally to a rental apartment in Montpelier, start work, and then college. This is problably the last break for a while. It’s time to explore then, isn’t it? So we do. We do. Gratefully.

Mosquitos follow my everywhere but the DEET works well, not that I’d want to live with it on me year in, year out. But who cares about a few weeks here and there? Toxic crap I know but it works. When I go pee though, that was a problem.

McClellan campground costs only ten dollars per site and another five for a generous bundle of (green) firewood. There’s a shower, potable water, trash cans, and a friendly host who lives near by. Yes, come here. Yes, stay a while. Millbridge is within reach of a bunch of interesting smaller villages, one’s you wouldn’t normally come across on you trip across US 1. The camping has been here since 1946, Dennis tells me, but the State only just realized it, so came a knocking over winter, demanding a licence fee, a few changes, and less sites. Dennis just took down a couple of numbers but left the picnic tables and still mows the grass in those numberless places.

“There, done.” He grins, his eyes wrinkle in mischief, “And they left. Not so bad after all. It might help that the Chief of Police runs this place and threatened the guy, but what do I care? Oh, if this fog eases up, tonight we’re meant to be able to see the Northern Lights!”

The fog only thickened though so I went to bed by nine, curled up in the camper with Harold on the front seat, Rosie in her crate (door open) and Stevie the cat at my feet, looking out the sliding window, gazing upon squirrels. We sleep deeply. 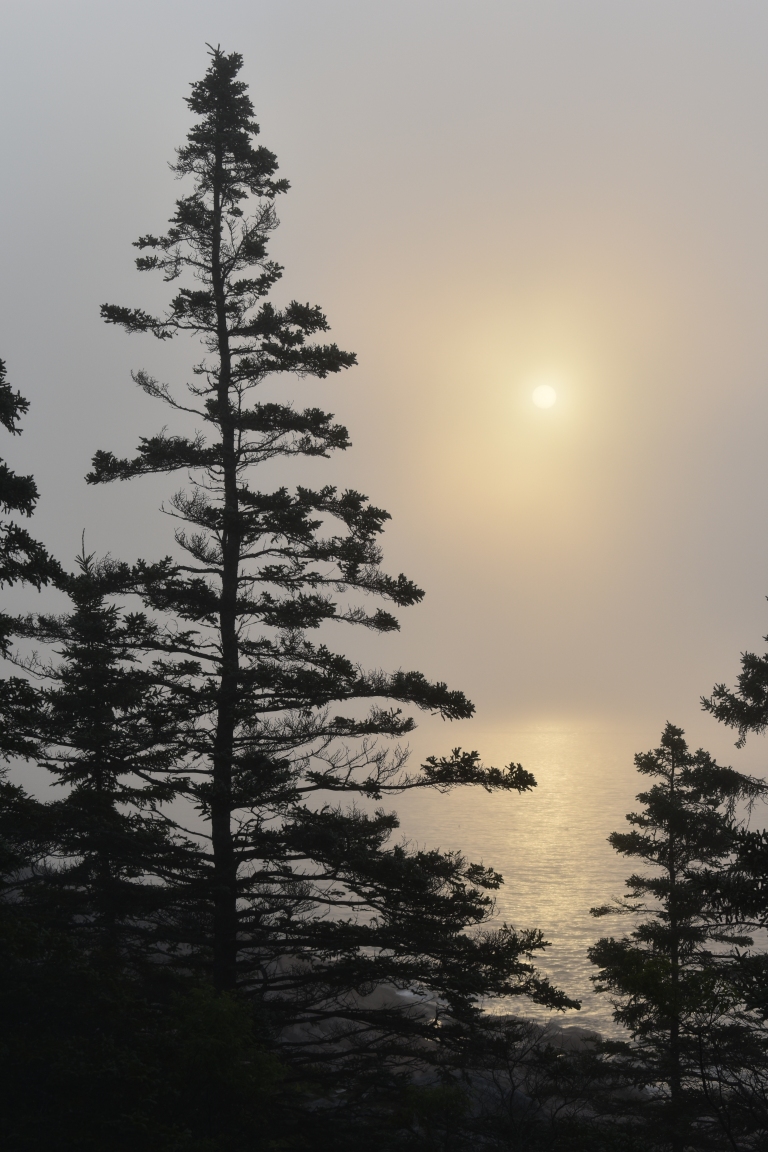 Such utter calm and peace here, looking out over the Altlantic, I’m dreaming of a retreat, a time in a cabin on the waterfront, a deck, some shade, a place to swim, to walk the dogs, and days of peace to read, write, and create more. Yes. I’ll get right on it. Right after I finish my three years of the MFA. 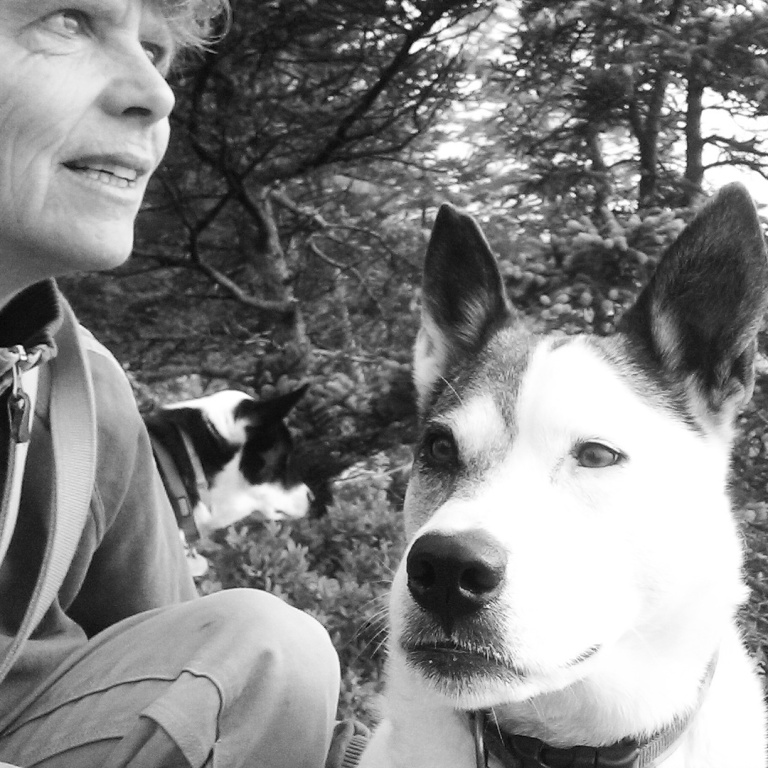 Next though, it’s Down East/ Up North. Time to find the eastern most town on the United State’s coastline. There’s a brewery there.