Taking Cat Stephen for a ride. Okay, so Cat Stephen is more commonly known as Little Stevie, a somewhat feral cat that came to our home when only a few weeks old.

He’s an indoor/ outdoor kitty, a fierce tiger at home. This is his first camping trip. We’ll see how he does. Since I worry about the little bugger at home, I figure I can worry about him on the road as well. He’s wearing a harness these days, and he’s tied up to a thin leash that is attached to the van itself. This way he can’t jump out when I’m stopped for gas or to stretch my legs.

Day one in the van with two dogs and a cat went surprisingly smoothly. The first mile out of my place is dirt road, shaking up the van nicely, and Stevie was contained in the large soft carrier. He didn’t like the noise. He didn’t like being contained. It was loud. For about ten minutes. He protested. I reassured. Rosie looked out the window and Harold looked worried.

North of Ojo Caliente, about an hour and a half from home, I pulled off onto a Forest Service road and let the dogs out. I opened up the windows, pulled down the screens, and let Stevie out of the carrier. With a bowl of water and the freedom to stretch his legs a little in the peace of a stopped vehicle, I left him to it. Five or ten minutes later, we returned, the dogs had run, peed and pooped, and were in a better mood. This was now the test. Attaching Stevie to the leash and opening the doors for him to explore. He didn’t want to, not really. A very nervous tiger he was, he scooted under the van, but it seemed to help him, to hang out with all of us outside, drink a little water, take a break.

When we set off again, I had him attached to his lightweight leash, which in turn was attached to the thin long dog tie-down. This way Stevie could find a favorite place in the van yet I knew he couldn’t escape through a window or door when I would next stop. We drove quietly for another hundred miles and pulled off on FR250 heading into the Rio Grande National Forest. The river flowed thick and fast, flooding much of the valley to the left of the dirt road. After five miles we stopped for a lunch break and the dogs ran through the meadow to the river and soaked up a gallon each, Rosie returned a brown wet dog instead of her usual white self. Great.

Stevie timidly stepped down and under the van. He no longer seemed as shocked by the day’s events, but more curious. He showed no interest in running off which was great. We hung out in the shade of the van and ate a sandwich, drank water, the usual kind of light meal. Stevie popped back into the van and climbed up on the shelf again, his happy spot.

I’d forgotten how far it to get to Stunner Pass and a slowly driven twenty nine miles later, along a narrow steep gravelly switch-back laden road we came to the pass of 10,541 feet. Snow hid in the shade of the barren Aspens. Rosie was getting restless. Harold and Stevie were quiet. The campground of five sites had only one other family. I let the dogs roam free, attached Stevie to the tie-out, and opened up the doors, settling in for a few days here. The Alamosa River is full of snowmelt and the constant roar reminds me of the ocean. This is stunning, a deep valley between ranges, with tall pines and a thick forest of Aspens only just beginning to bud out.

In 1892, some four hundred miners set up camp here during the Gold Rush, with a post office next to the river and mail delivered by sled dog for six months per year. By the early 1900’s though, all but a few miners had moved on looking for more gold, more gold, and more gold. There is one cabin at the entrance to this primitive campground, partially restored by the looks of it, but falling down again.

In the middle of the night, Harold wakes me shaking and whimpering as he looks out the window. It’s cold for sure and I figured he’d seen or heard some animal and was scared. With a blanket over him, I fell back asleep. I woke soon though to the sounds and smells of diarrhea. Yep, Harold shat all over the van carpet. Poor bugger. I struggled to find the flashlight and attach Stevie to a leash. Harold leaps out unhappily as I throw out his bed and the carpet matt. I look down to see I’m standing in wet sloppy brown poop. Shit. Yes. I climb out, it’s bloody cold, and I wash off in the dogs’ water bowl. Harold has climbed back inside onto my bed and fallen asleep, snoring. Rosie is still asleep. Stevie purrs. 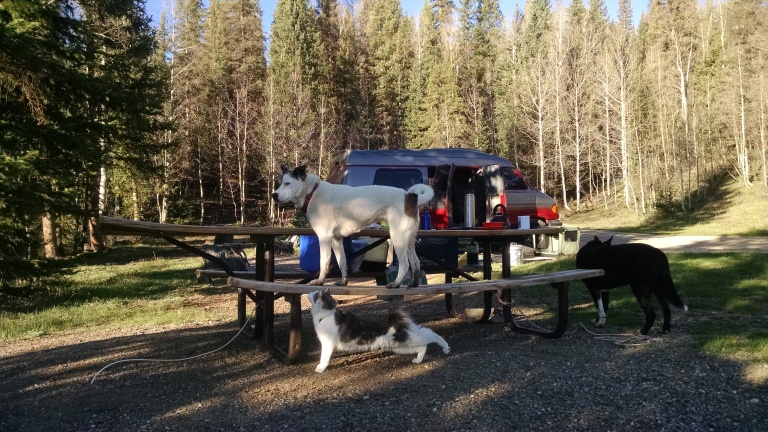 The morning at the campsite is even better than last night, a slow moving mist, the roar of the river, a smoky fire and strong coffee. The other campers left early. The doors are open to the van and all animals are off leash, free to roam. Stevie comes and goes a little, all the sights and sounds and smells suitably awe him. His shelf is his happy place. Harold’s bum is still giving him issues. Rosie is muddy again. And I’m tired and my cheeks (upper cheeks) ache from smiling so much.

One thought on “Taking Cat Stephen for a ride”